The 1908–09 season was Manchester United’s 17th season in the Football League and fourth in the First Division. 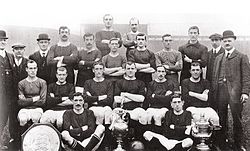 The Manchester United FC team of 1909 posing with their trophies won, they are: FA Charity Shield, the Football League (First Division, won in 1907-08) and the FA Cup.

This week’s podcast is with Marc Serber, we talked about the matches from…

Joining Tyler is Bernie from the Under the Cosh Podcast.